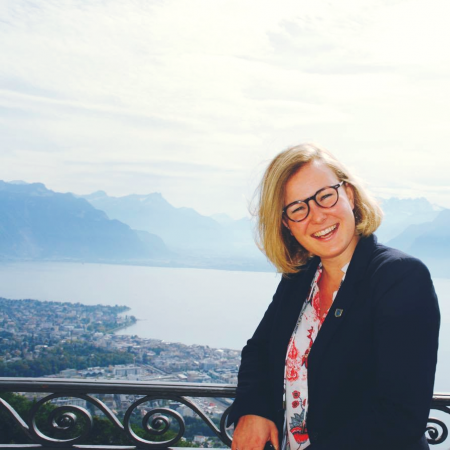 MBA student, Aubane Rietsch, made her dreams come true by obtaining the position of Sales and Marketing Trainee.

Thanks to the vast network of Vatel Switzerland’s Career Counselor, Mr. Neil Koolmon, Aubane RIETSCH was able to get the internship at The Mirador Resort & Spa in Vevey Switzerland.

This small and charming hotel enabled Aubane to build and learn different aspects of Marketing. Her Department is particularly in charge of all social networks such as the hotel’s Facebook page, Instagram and Twitter. The hotel promotes Aubane’s independence and ability to post and communicate what she sees fit for the hotel’s image. She states “it’s really fun to see what posts are the most popular among people, for us the view is always a big success!”

She also mentioned that the most critical function of her job is to continuously keep the information up-to-date on the website as it’s linked to the distribution channels like booking.com, TripAdvisor, and Leading Hotels of the world. In addition to her primary tasks, Aubane’s department is also in charge of marketing support such as the creation of flyers and newsletters. In addition to her duties, Aubane often meets with bloggers and journalists to develop new offers.

Aubane started at the turning point of her Department as her former manager was leaving, this enabled her to really learn and develop her independency and strengthen her creativity on the job. By the time she really grasped her duties, she was able to even train her new manager that came on board later on during her internship.

We are very proud of Aubane’s achievements and her further developing competencies on the job. We look forward to welcoming her back on campus in the next month to come for her final semester in the MBA Program.

Find your course in 3 steps

Vatel serves cookies to analyse traffic to this site. Information about your use of our site is shared with Google for that purpose. OK